OVPN is a very well-known provider in this sector. With the company location (Company: OVPN Integritet AB) in Sweden, this provider is characterized by technically flawless and advanced data security. Besides the OpenVPN standards, secure DNS services and multi-hop are also available. OVPN is a premium provider, so you can also expect the appropriate speed and customer service.

Our conclusion regarding OVPN

OVPN is a Swedish provider that should be considered as a premium service class. By this, we mean the technically perfect implementation, the use of the best available hardware for servers and absolute focus on user privacy. While the service has been known in Sweden for many years, it has only gained a good reputation internationally since last year, and especially in this area, which has particularly high demands on anonymity.

OVPN = Fastest VPN from our tests.

Also, OVPN brought together the fastest speed ever measured in our tests. We were able to transfer data within Germany at more than 800MBit/s! This was realized with the new Wireguard protocol, which is currently only available on Swedish servers.

The goal is maximum privacy through the use of OVPN

In any case, the provider is qualitatively equipped and offers many features that really increase the privacy of the users. The servers are 100% owned by the provider and are therefore also protected from monitoring by external hosting providers. Furthermore, no hard disks are used, and the operating system is only carried out in the temporary memory of the servers. This effectively prevents third party access to the running data on the server. Power gone = everything gone!

Images of the applications

2. About the OVPN company

The Swedish company is managed by David Wibergh, a well-known entrepreneur that raises the company’s credibility. The service is also not obliged to store or share user data in Sweden. The service has been on offer for more than 5 years and currently has about 100,000 paying customers.

OVPN is also a special VPN service because it uses its own hardware and switches and does not rent them from any hosts. Of course, if the provider can control and influence all components himself, this makes a difference in any case.

By using own hardware, the speeds that can be achieved are often better than with virtual servers, which then have to share the same network card with dozens of other Virtual Servers, etc. The scalability may be lower, but OVPN is well-prepared for this because of its huge equipment.

OVPN also offers Wireguard access to its servers in Sweden. Wireguard is a much simpler but no less secure VPN protocol that allows stable connections even through very restrictive networks and is also much faster than OpenVPN in comparison. Therefore, it would be exciting when the service offers this technology in other locations!

We visited OVPN in Sweden!

We were in Stockholm from September 23rd to 25th, 2020 and personally visited the provider OVPN. We were also able to get a personal picture of the processes and the data centres. These videos are not advertisements. All travel expenses were covered by our company’s own funds.

Insights into the VPN service

Court process confirmed: OVPN does not save any user data

In the video on the right, David Wibergh talks to us about a past lawsuit aimed at obtaining user data. Since the judgment was delivered a few days ago and confirms that OVPN does not store any log files and therefore does not know who is using the service, OVPN did not have to pass on any data. Watch more in the video …

Interview with insights into OVPN 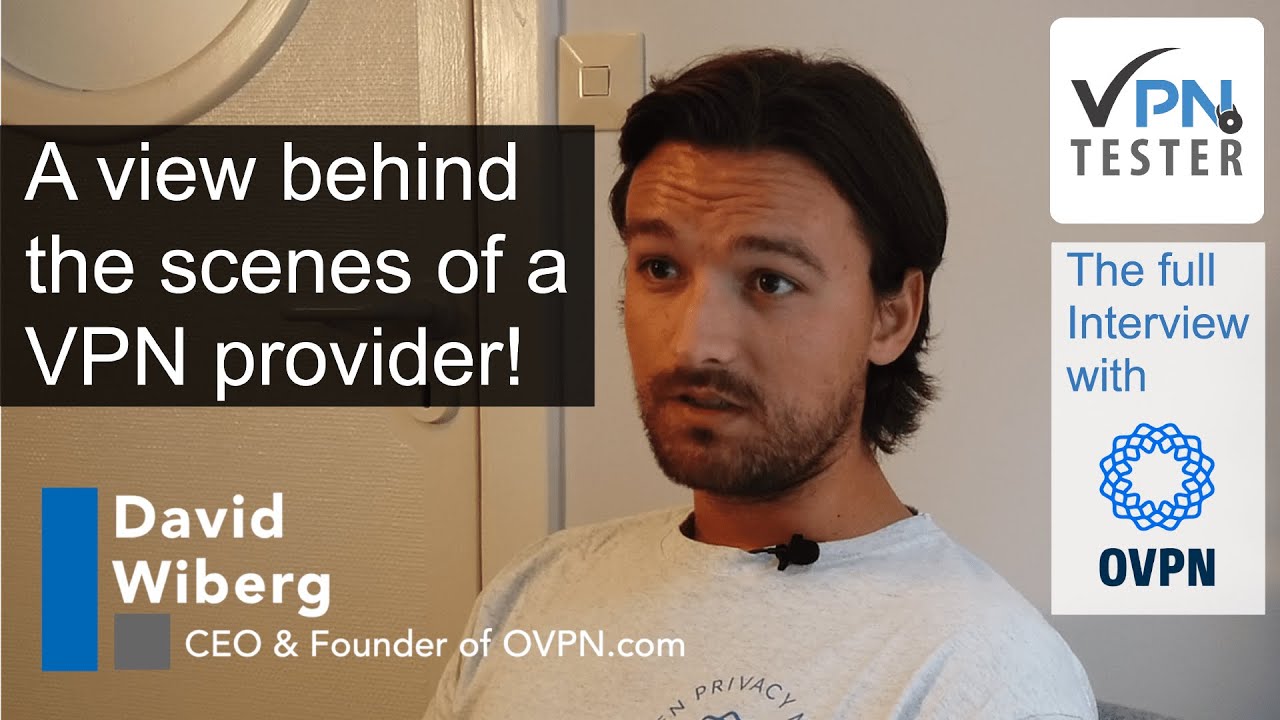 Interview with the founder on data transfer 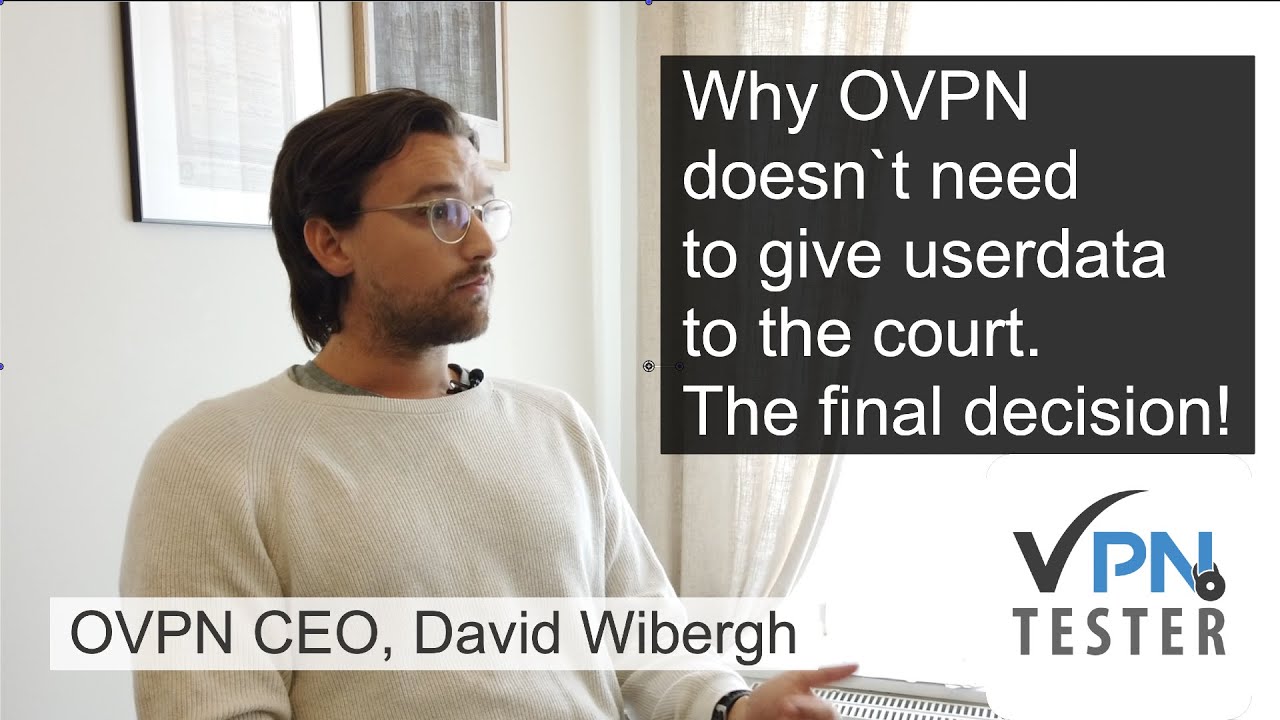 3. Prices and tariffs for OVPN

OVPN is certainly not a cheap provider, but that’s not what we expected when we saw all the technical effort behind the service. In general, the service is in the league of higher-priced VPNs, with the difference that the focus was not on the mass market but to ensure maximum security and performance for individual customers.

Compared to ExpressVPN, which has about the same price, OVPN certainly offers much more powerful hardware, even if there are fewer locations.

You can pay with PayPal, credit cards, Bitcoin or with CASH (no email is needed to set an account!)

The service offers separate applications for macOS, Windows and Linux. The remaining devices are connected via the free OpenVPN application. There are extensive instructions on how to do this and they are certainly easy to use even for laymen.

Own application for Windows, macOS + Linux.

The only applications that OVPN itself provides are the applications for Windows, macOS and Linux devices. These were developed by OVPN itself. All the instructions can be found on ovpn website.

By converting and using Wireguard, OVPN can now also use native support for this protocol directly in Android.

The result of it is a new Android app that is, unlike the apps of the competitors, really based on Wireguard and can also be connected automatically. So OVPN continues to use the “Wireguard standard” and is therefore 100% Wireguard compatible with every Wireguard client, and has found a solution with their own app to leave this standard intact and at the same timeto use the protocol.

With other new Wireguard providers such as “NordVPN it Nordlynx” or “VyprVPN with Wireguard”, Wireguard login procedure has been changed in the way that it can only be used with their own applications. So if you want to use a router with Wireguard from these providers, you cannot use this modified Wireguard protocol for this. With OVPN it is possible.

OVPN is the fastest VPN service we have ever tested! To be fair, we were connected via a Wireguard connection instead of OpenVPN or IEKV2. With OpenVPN, the values are still impressively fast but hardly reach more than 400MBit/s.

Fastest VPN connection ever measured over the Internet! (>800mbit/s)

OVPN focuses on security and privacy on several levels:

VPN cascades are clearly one of the most important special functions offered by OVPN. Besides, however, it also has its own Server-Hardware, the renunciation of hard disks for the entire operation, and also its own firewall, and switches hardware at the server locations. Additionally, it has professional equipment, in direct comparison with other services like NordVPN, which rent only virtual servers.

A cascaded VPN connection from Malmö to Stockholm can also be used to conceal your own identity from targeted surveillance on the Internet. This technique is used by VPN providers for the special anonymization of users. However, there are VPN services that allow users to determine their own Routers. OVPN only provides a Router over two locations and this can be chosen optionally, which increases the total price.

OVPN does not store log files, and most users even use cascades to further obscure the origin and connections. The servers do not have any hard drives and work in RAM disk mode. This means that the entire operating system, whichever is processing the local activity, is only found in the temporary memory. As soon as the server is switched off, all data would be lost.

Therefore, nobody would have been able to extract or access data from the servers.  This additionally protects against any seizure of the servers and also against hacker attacks. Through the combination of different locations and the technical design, users are protected to an extraordinary degree from surveillance and prosecution.

Streaming with a service that doesn’t have thousands of servers is not usually predestined to allow worldwide streaming, but that shouldn’t be a limitation for most users. OVPN has servers in Germany, the USA and some other countries, and these locations are also very good for accessing limited local content.

One of the most popular topics for OVPN is certainly torrent usage and downloads. Due to the extremely fast servers that can create and handle thousands of connections at the same time, the service is perfectly suited for this. Also, naturally, a Swedish service is practically in the centre of all Torrent users in Europe, so of course, many of the other partners in Torrent will be connected directly through the same service and therefore a significant speed advantage is achieved. We haven’t found a service where Torrent usage was so fast, although it is difficult to evaluate or compare due to different data, sources and times.

9. OVPN on the Router

The great strength of the OVPN application is that the operator has even developed its own VPN Router (Vilfo Router) and also markets it. With this Router, data can be transmitted faster than with any other Router we know. In our tests, the Vilfo Router with the highest OpenVPN encryption achieved more than 450,000 kbit/s, which actually is an exception even in the professional sector. However, the Vilfo Router is not exactly a cheap device, costing more than 400 Euro.

OVPN can be used on any type of OpenVPN client Router, and therefore also on the much cheaper ASUS or Gl-iNet Routers. Even with the cascades there are no problems.

Due to its low latency, OVPN is ideal for online games. Besides, with Wireguard and OpenVPN you can also supply Playstation and Xbox directly in the future.

The denial-of-service attacks that are often carried out by unfair players against others are safely blocked.

OVPN can be used on mobile devices with free apps, which means that the service does not offer Android or iOS apps but recommends using free apps for it. The setup is a bit more complicated for the layman, but in daily use, this circumstance is quickly compensated.

OVPN can be used over different ports and with OpenVPN over TCP + UDP most of the local locks can be bypassed, but Wireguard is even more outstanding. This new technology used by OVPN also promises smooth connections in China, Turkey or Dubai.

At OVPN, customer service is in direct contact with the customer, which can be done via chat, email or even over the phone. The company’s technicians help here personally and there is no support staff who only send standard texts as answers. So personal customer service is not just a catchphrase but reality.

The website, instructions and applications are provided with corresponding help texts and are therefore easy to use, even without prior technical knowledge.

If you want to connect to a router or a connected device via a static IP address, you can reserve real static IP forwarding ports for €3 per month with OVPN. This is the most suitable way to get a static IP address on almost any device that is also accessible across the Internet. Other providers have only limited port forwarders and therefore are not suitable for accessing various devices such as NAS, cameras, or web servers, etc.

Which streaming platforms does OVPN support?

OVPN offers the service for our readers for a reduced price. Just $59,99 for 12 months supscription.

Linguist and author from our Tech-Site. She hates surveillance and wants privacy at Internet for anyone.

This website is an independent comparison site that aims to help consumers find the most suitable product for their needs. We are able to maintain a free, high-quality service by charging an advertising fee to featured brands whenever a user completes a purchase. These advertising fees might impact the placement of the brands on this page and combined with the conversion rates might impact the scoring as well which are further based on a combination of review findings, user experience and product popularity. For more information please review our how we rate page. We make best effort to present up-to-date information; however, we do not compare or include all service providers in the market.